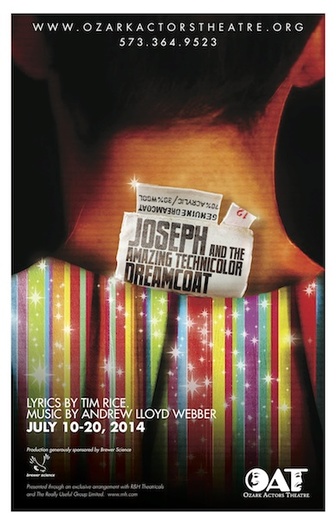 Joseph and the Amazing Technicolor Dreamcoat

Rolla Daily News:  It is 70 minutes of pure joy.  The charming thing about this OAT production is its simplicity… What really makes this show so alluring are the outstanding performances and great energy brought to the stage by this talented cast with imaginative directing by Jason Cannon… This is a production that MUST NOT be missed and you absolutely should take the kids…. Speaking of kids, I would be remiss not to mention the stellar Youth Chorus.  The 20 or so local children that participated in the show were fantastic.  Not only did they sing and dance like pros, they performed an important function by supplying prop items kept on bookcases stage right and left to the chorus as they were needed.  The kids were an integral part of the action and not just stage dressing.  Kudos to Jason for giving these kids a chance to be part of something so special… On a sad note, this will be the last production that Jason Canon will direct for Ozark Actors Theatre for a while.  Jason is now living in Florida and will not be able to return to Missouri next summer to direct.  He will be missed.  Jason is an outstanding director and I have come to expect only the best from a Jason Cannon directed production.  He never disappoints.  Best wishes Jason.