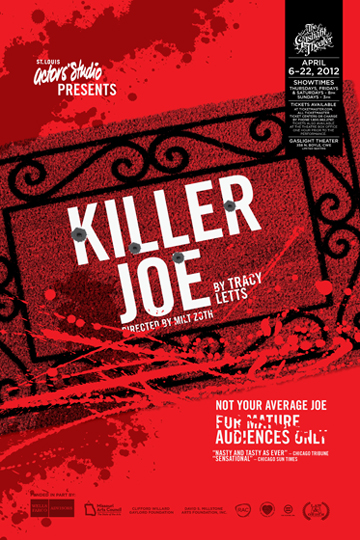 RiverFront Times:  As cowboy killer Joe, Jason Cannon doesn’t need a horse to stand tall in the saddle. From his first stealthy entrance into the Smiths’ trailer home in his Stetson hat and sleek Australian duster, Joe commands our attention. Cannon has always appreciated the effect of the extra beat, and he uses that knowledge to great effect here… The current St. Louis Actors’ Studio staging is most effective when it is most quiet. Every time Joe Cooper, the menacing title character, keeps his mouth shut, the audience is taut with expectation. His baleful pauses are more threatening than any words he utters. Joe is a slow fuse inching its way toward a keg filled with gunpowder. We know that when the connection is made, there’s going to be a ferocious and very lethal explosion… The cast is uniformly terrific.

The Vital Voice:  Cannon comes in wearing a long trench coat, a black Stetson, neatly pressed jeans and a shirt with an impressive belt buckle. Well, course, it IS Texas. He is, not incidentally, also a police officer. His cowboy boots add a couple of inches to his 6 ft.-something height, and he literally fills the space, not just with his size, but with his presence. He uses big words. He is courteous and attentive to Dottie, treatment she definitely isn’t used to from a man. He almost makes us forget he’s a sociopath. Not quite, but close. With his tight-jawed lack of affect, he pulls us closer while pushing us away. He is so much more interesting than the Smiths… He is an island of stillness amidst the storms constantly generated by the family.

Ladue News:  Cannon, in a suitably raspy voice that befits the mysterious assassin, casually conveys Joe’s surgically precise method of carrying out his assignment. He’s equally powerful in sudden bursts of fury that trigger an alarming melee with a flurry of fists and body slams all realistically achieved

St. Louis Theatre Snob:  Jason Cannon gives Killer Joe Cooper a steely quality that’s hard to resist.  As corrupt as he is, Cannon’s Killer Joe displays a polite, calm but threatening self-assured presence that takes you from the minute he walks onstage.  He also comes off as the most intelligent one in this group.

KDHX:  The ensemble cast made this play sparkle, if you can apply that term to something so warped.

Broadwayworld.com: But, they’re all in support of Jason Cannon, as the coolly detached and sexually adventurous, “Killer” Joe Cooper.