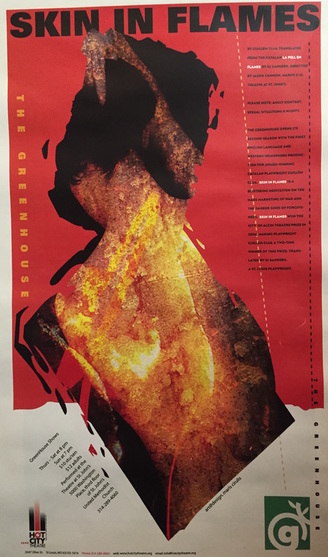 RiverFront Times:  Anyone attending Skin in Flames is advised to wear asbestos clothes. This intense Spanish drama by Guillem Clua, which is receiving its American premiere at the hands of HotCity Theatre’s GreenHouse, ignites a theatrical wildfire of suspense and surprise that sears the imagination.

KDHX:  The GreenHouse has no lavish budget, but it’s hard to see where spending more money on this production would have made it better… If Mr. Cannon had done no more than to ensure that this potentially confusing [play] would be readily comprehensible throughout, that alone would be a noteworthy accomplishment. In fact, a respectful approach to the serious intent and vision of the text is evident throughout.

Intermission Magazine:  The direction of this violent and difficult play was by Jason Cannon, and he handled his actors with both insight and restraint.