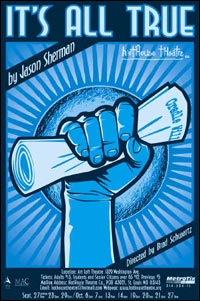 KDHX:  Jason Cannon is…extraordinary as the “English soldier” in the epilogue.

The RiverFront Times: Cannon imbues McCann with compelling complexity, moving believably from obsessive paper-tearing to violence to a sweetly sung Irish love song. What sets his work apart from most of the other actors is a sense of living through the pauses rather than waiting for them to end.

The St. Louis Post-Dispatch:  Jason Cannon dominates the play with a gripping portrayal of Kyle, a brilliant young astronomer mourning his murdered, beloved bride.  Most of Act One is his monologue…Cannon reveals a surprising physical ease that makes the audience comfortable with him.  That way, we’re already close to him as his story takes terrible turns.  Instead of making us want to turn away, Cannon’s Kyle keeps us so close that we want to comfort him.

RiverFront Times:  Yet one thing about this production works as tightly as a well-wound clock, and that is Jason Cannon’s thoughtful, ruminative portrayal of a New York City fireman.  Throughout the evening it’s as if Cannon is acting in a different script from everyone else.  While other actors are playing the lines, Cannon is playing the character… Cannon continues to seek truth through stillness.  Here his focused search pays off in an ever intriguing, at times poignant, performance.

The RiverFront Times:  The evening is anchored in the Vershinin of Jason Cannon. Whenever he appears, the play attains an urgent hush.  Cannon’s weary soldier justifies and exploits the production’s stillness; his mesmerizing performance is the essence of simplicity.

The Importance of Being Earnest

KDHX: That fine actor Jason Cannon, as Jack Worthing…often catches Wilde’s rhythms—he plays the final scene, when his character discovers who he really is, with deliciously bold pauses.